On Sunday 8th July 2012, despite the testing weather conditions and delayed trains, SOS Africa’s first London 10k Team took to the streets of the capital to raise valuable funds for the SOS Africa children just weeks before the start of the London Olympics. SOS Africa would like to say a big thank you to David Burns, Mark Fletcher, Chloe Fuller, James Bailey, Matthew Davies, Stephen Patterson, Tom Stubbs, Sarah Yong and Emma and Sophie Barker-Davies who collectively raised a fantastic £2200! 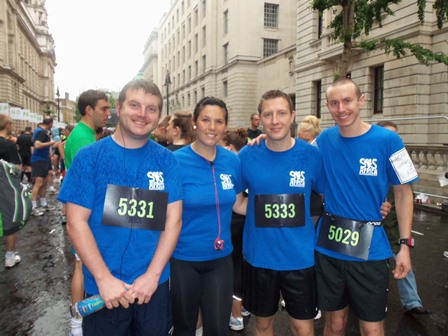 Following the successes of the event, we asked David Burns, our leading fundraiser for the event to write about his experiences of the day:

It was early on a typical British summer morning (my creative way of saying it was raining). Approximately 20,000 runners, wearing anything from the provided Nike running shirt to a toy soldier costume (head-to-toe in green, including his face), were lined up along Piccadilly anxiously awaiting the start of the British 10k London Run. After being treated to some live entertainment, the national anthem and Paula Radcliffe’s best attempt to motivate us, the gun went. We were off for my first 10k race...

My running “career” began about three months before this event, as an attempt to get fit and find something to do with myself on weekday evenings after a long day of working in front of a computer. Knowing that I have a habit of quickly giving up new activities, I took the plunge to sign myself up for a 10k race (at this point I had not run more than one mile for years). As I live in London, the British 10k seemed like the perfect race.

Why SOS Africa? Well, I have always wanted to do an event like this for charity and especially for one that looks after children in Africa, by giving them the education and healthcare that everyone deserves. In addition, I wanted to raise money for a charity that is perhaps not that well known. Searching through the list of charities offering places in this race, I came across SOS Africa. Following a look around this website, it was great to see exactly where the money goes and the positive effect it has on South African children. The decision was made and I got in contact. I now had no choice but to run!

The race day was a superb occasion. Thousands of people, of all different ages and abilities, had come together to run either for themselves or for charities. I got talking to a 16 year old boy from Wales (I don’t know what they feed them in Wales but I originally thought he was my age – I am 27!). He was also running his first race, doing it for his dad who had a heart condition. I have no doubt that he probably finished ahead of me. I should have remembered his race number to find out!

The race route took in some of London’s most famous landmarks, including the London Eye, Westminster Abbey, Big Ben and Downing Street. Along the way crowds of people had braved the rain to cheer us on, which created a fantastic atmosphere and really helped when the legs started to get tired (especially the high-five I got from a small child). On a personal note, I managed to “smash” my target time of 50 minutes, clocking up 49:48 after a pretty painful last few kilometres! One week on and my legs have just about recovered.

So should you do the British 10k for SOS Africa? Definitely! In spite of the weather, everyone looked like they were enjoying themselves and you are unlikely to get a more scenic run and better crowd support anywhere else. This is an ideal event for beginners and a great fundraising opportunity. It was an honour to be a part of this year’s SOS Africa team.

Next stop for me: a half marathon!

Abseil from the iconic Wells Cathedral in celebration of our keyworker heroes this autumn and raise vital funding for the SOS Africa, Wells Cathedral and The Forever Friends Appeal -...